The wave of protests that started late December 2017 in Iran and continued through the New Year shook not only the regime in power but the entire world. The people of Iran poured into the streets across the country rejecting the clerical regime in its entirety.

There are two vital issues at hand:

(2) The alternative to this regime

During the protests, people chanted “reformists, hardliners, the game is over” to reject all factions of the regime and also “death to Khamenei, death to Rouhani” to show their resolve to overthrow the entire regime. This left no doubt that the people of Iran want regime change and nothing short of that. The people called for a republic and a Free Iran.

To the surprise of many Iran experts and governments in the West, the core of the people on the streets of over 140 cities were the same sector of the society that were wrongly thought to be the power base of the clerical regime. Indeed, the entire nation is demanding regime change.

In such sensitive circumstances it is quite natural to see many parties claiming to be the alternative to Tehran’s mullahs.

It is also natural that all groups and individuals, associated or non-associated to a third party, those who are willing to sacrifice and those opportunists who are seeking to jump at the opportunity, are surfacing and claiming to be patriotic in nature and opposing the ruling apparatus.

This resembles the end of winter and the arrival of spring, bringing about the birth of plants. Alongside flowers, however, we also witness the growth of weeds. Next to flowers we see tall and powerful trees full of leaves and blossoms.

When the air speaks of a revolution and change, there are many parties seen rising from their sleep ready to hijack the ruling state, and willing to resort to any and all deceptive measure necessary.

They begin to claim of having a long struggle history against the ruling regime, forging records of years in jail and enduring torture. Worst of all, through demonizing propaganda, they begin to hinder the efforts of the truly democratic entities seeking to bring about real change.

In such circumstances, the question is who is the true alternative to Iran’s regime? 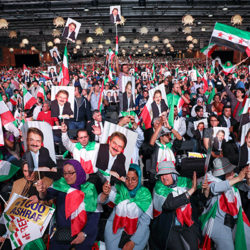 The history of revolutions across the globe provide the following facts:

1) An alternative organ has members willing to sacrifice their all, and its enmity against the ruling regime is crystal clear for all parties.

This entity, involved in a continuous war against  the enemy, has seen many of its members lose their lives fighting for their people.

This entity also has seen many of its members imprisoned by different regimes ruling their country. These prisoners are resilient in the face of torture and harsh conditions, leading to their execution.

This entity has complete faith in its objective, being freedom for its people.

2) This alternative has roots in its nation and has risen for their cause.

3) This alternative has access and relies on popular sources for its intelligence. When the enemy launches massive clampdowns, this alternative’s roots among the people allows it to obtain intelligence from the ruling regime and expose their true nature to the outside world.

For example, the revelations made by the Iranian opposition People’s Mojahedin Organization of Iran (PMOI/MEK) regarding the Iranian regime’s clandestine nuclear program.

4) A true alternative should not be associated to any foreign power. It must be independent to the very meaning of the world and especially rely financially on its people and supporters.

5) This alternative must have a strong, democratic organization.

6) This alternative must have a specific leadership established around the cause of opposing the ruling regime and through the years proving its honesty and competence. The leadership must be fully involved in the struggle against the ruling dictatorship, paying the very price of all the sufferings.

7) This alternative must represent people from all walks of life in society and focus its efforts to establish a democratic state.

8) This alternative must be recognized on a global scale and establish this recognition through years of struggle.

Looking at Iran, the only entity fitting such criteria is the Iranian opposition National Council of Resistance of Iran (NCRI), a parliament-in-exile led by the NCRI President Maryam Rajavi.

As Mrs. Rajavi reiterated in her speech at last year’s grand gathering, the intense situations in Iran speak of three fundamental truths related to obtaining freedom and democracy in Iran: Regime change in Iran is an imperative and within reach and there exists an alternative and an organized resistance capable of toppling the regime.

The Iranian Diaspora is planning to hold its Annual Convention on June 30 in Paris to express their support for the democratic change in Iran.

For more information about the Iranian opposition convention visit this website.