Iranian Students joined nationwide protests as the students from Tehran’s Azad University of Science and Research continued the second consecutive day of their demonstration on Sunday, December 30, protesting the loss of their friends and colleagues during a bus accident in which 10 students lost their lives. During the protest, the President of the university fled from the scene by his car instead of answering the students. Thousands of students also rallied on Saturday for the same cause, the Iranian opposition (NCRI) reported in a Statement on December 30.

The astronomical thefts and plundering of the people’s assets by the leaders of the mullahs’ regime have prevented any progress and made Iran one of the most vulnerable countries in the face of incidents such as road accidents, fires, earthquakes, flood and so on.

The students demonstrations have taken place concurrent with demonstration by other strata of Iranian society including Teachers and Farmers despite repressive measures by authorities and dispatching numerous security units to the college campus aiming to prevent any further rallies. 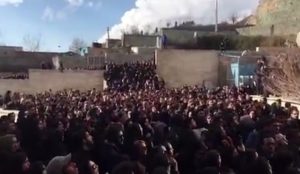 The regime had dispatched large number of the repressive forces and plainclothes mercenaries in front of the university and agents of the Ministry of Intelligence called “Herasat” and “Basiji” agents inside the university to prevent any protest but they failed leaving the authorities with no choice but to give in to the students demand of continuing their gathering.

According to reports, the families and friends of these college students, including those who lost their lives in the bus accident, have been joining the ranks of their loved ones. Numerous mothers of those who perished delivered speeches demanding the expulsion and prosecution of authorities responsible for this tragedy. They are especially demanding action taken against Ali Akbar Velayati, the University’s head of the board of trustees,  who is also a senior foreign policy advisor to the regime’s Supreme Leader Ali Khamenei whose office controls all affairs of the University.

According to the Statement by National Council of Resistance of Iran (NCRI), the protesting students chanted: “Students rather die than tolerate humiliation; Velayati, Velayati, you are responsible for this crime (referring to the death of 10 students in Bus accident). They also chanted: “Incompetent person in charge, resign, resign! Incompetent person in charge should be tried in court of law! 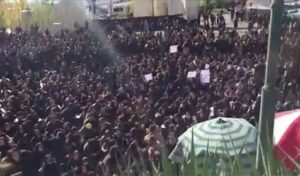 The students continued chanting the following slogans in front of the university administration office: “You, shameless killer, come out!” Once the demonstration started, suppressive agents did not allow students to enter the university in order to prevent the spread of protests and demonstration. A number of students blocked the movement of buses and cars inside the university by sitting on the street.

The students also protested against the regime’s tricks to cover up the extent of the tragedy by dismissing low-ranking elements to save the main individuals responsible for the crime. They also interrupted the speech of the regime’s agents by booing and chanting: “Turning our backs to the enemy, our faces to the motherland.”

Iran Democratic Association (IDA-Canada) and Supporters of the Iranian Resistance in Canada express sincere condolences to the families and friends of the students who lost their lives and wish speedy recovery for the wounded. The fact is that the Iranian regime is the main party responsible for this tragedy as the astronomical plunders by the regime officials and expenditure of national wealth on suppression inside the country and terrorism abroad leave no room for any progress and development causing the highest rate of casualties in such incidents.

Iran: Fifth Day of Strike of Bazaar Merchants in Tehran

The strikes and demonstration by Bazaar merchants, store-owners and  people in Tehran and other cities entered the 5th consecutive day on Thursday as they get bolder […]