Water shortage and scarcity is one of the crises that struck Iran since the inception of the mullahs regime in Iran, but this crisis has intensified in recent years during the Presidency of Hassan Rouhani. The water crisis has struck people across the country such that it has become the source of social, ethnic and even security problems in Iran in the past few years.

In a meeting with the authorities of the energy ministry on Tuesday, Rouhani made some bizarre comments and plenty of promises and gave some absurd orders to solve the country’s water problems, but those orders and promises sound more hollow than ever.

In the meeting that was held after his government’s inefficiency in solving the water crisis was criticized even by the officials and personalities closely tied to the regime, Rouhani ridiculously suggested transferring farming activities to other countries by renting lands from the countries where water is plentiful in order to solve the water crisis plaguing Iran.

Rouhani said: “For some fruits and vegetables, or other farming goods, is it better to produce them inside the country or transfer the production to beyond our borders? Let’s rent lands from another country. Maybe there’s plenty of water there. It would be cheaper.”

He also suggested that water shortage problems stem from lack of education and said: “The education ministry and the teachers should come to the aid of the energy ministry in saving water and electricity.” 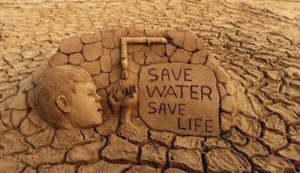 Rouhani stated his remarks at a time when several provinces in Iran are suffering from severe water shortage and scarcity. Isfahan is a stark example, where thousands of farmers have been protesting over the mismanagement of water sources and the government’s plundering and theft of their rights to water.

The Iranian Regime has tried to solve the water crisis in a variety of absurd ways that have only intensified the problems. In fact, the government has tried to circulate the problem to avoid a permanent solution. For example, it has transferred the water of Isfahan to neighboring Yazd to solve the water problems in that province. This measure has disrupted the ecosystem of Isfahan and has dealt a heavy blow to the farming industry of the province.

The regime now suggests transferring water from Khuzestan to Isfahan. Khuzestan is already reeling from the effects of the excessive dam creation projects by the Revolutionary Guards (IRGC) that is using the province’s water for its own purposes. While the entire country is also facing potable water problems, Rouhani is suggesting to transfer water from the Caspian Sea to Semnan and Markazi provinces.

Addressing the regime’s MPs in a parliament session, Rouhani had previously stated that he was thinking of all the country’s provinces noting “water as an important issue” and said he will solve all the problems. “Without a doubt, we are thinking of all the provinces of the country. In every part of the country, water is an important issue and we must solve these problems,” Rouhani said and added, “The budget is at your disposal. Do what you must and we will take the necessary measures if you allow.”

Rouhani’s remarks, however, caused outrage among MPs who are fearful of protests in their provinces. They are calling Rouhani’s plans irrational, even though he enjoys the majority support in the parliament. 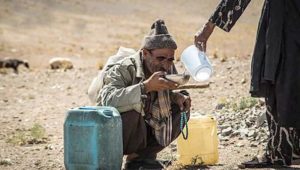 Although thousands of villages have been deserted because of the water crisis and scarcity, and their inhabitants have migrated to margins of large cities where they now live in utter poverty and misery, in urban areas, the situation isn’t much better.

In some cities, instead of pure, clear water, the people have to do with muddy water coming out of their homes’ pipes. In some cases, not even the muddy water is available. In the summer, the situation gets even worse.

In Ahvaz city, through which passes the largest river of Iran, Karoun River, the citizens’ water looks nothing like purified, drinkable water and is filled with mud and minerals.

As the recent protests and uprising over water crisis and other problems in Iran suggest, the Iranian people have no illusion as to the regime’s inefficiency and incapability to solve these problems. They know well that the only solution is a regime change in Iran and that will occur rather soon by the Iranian people and their organized resistance.