The farmers of Varzaneh, east of Isfahan, have continued their protest rally on Friday, December 28, against unfair management and distribution of water sources and the regime’s corrupt policies that has deprived them of their needed water to irrigate their lands.

The Iranian regime has been building several immethodical dams and water channel to divert the waters of Isfahan and its famous Zayandeh Rud River for their own unpopular purposes without considering the effects on environment and consequences on local farmers. Among the disputed engagements is a water pipeline transferring Isfahan’s water to neighboring Yazd province. These measures have deeply damaged the agriculture in Isfahan, which is one of the main occupations of the province’s population.

The protesting farmers were chanting anti-regime slogans such as “Shame on this government.” They were also chanting, “We will stand, we will fight and we will take back our rights.” 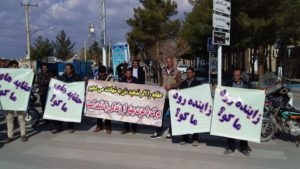 The farmers shouted, “Our enemy is right here, they [the government] are lying when they say it’s America,” a slogan that has become popular in the past year and reflects the people’s rejecting the regime’s propaganda pertaining to blaming foreign governments for the country’s economic problems.

Protesting farmers were holding banners that read: “What happened to our right to water.” The excessive creation of dams and water channels mostly orchestrated and managed by the Revolutionary Guards to fulfill the needs of its own profitable projects has diminished the Isfahan’s farmers access to water.

Hassan Rouhani, the regime’s president, promised to solve the problems of the farmers of Isfahan, but nearly halfway into his second term, he has yet to do the least to restore the farmers’ access to water sources.

Concurrent with the ongoing nationwide strike and protests in Iran, the teachers and educators of Isfahan gathered in front of the city’s Education Department on […]

Heavy rain and freezing cold did not stop supporters of the Iranian Resistance, the NCRI and PMOI, in Canada to participate in a demonstration on […]