Concurrent with the farmers’ demonstration in Isfahan on January 2, retired government employees gathered in front of the regime’s parliament in Tehran protesting against their dire livelihood and the clerical regime’s failure to implement their promises that proved to be deceptive. At the same time, the retirees in Mashhad staged gathering and demanded their rightful claims.

The retirees are demanding separate appropriation in next year’s budget for higher pensions to address rising prices. Iran’s economy is in the grip of double-digit inflation, reaching as high as 35 percent and prices for essential goods have skyrocketed. 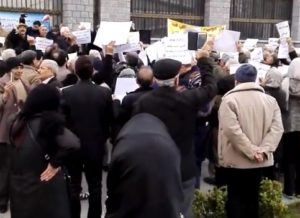 In Tehran, the retirees chanted the following slogans: “Retirees, stand up against oppression and discrimination; Government betrays, Parliament protects; We will not rest until we get our rights; No nation has ever seen such a lousy parliament; Cry out from this much injustice”

The demonstrators also chanted: “They abuse and misrepresent Islam to suppress people; Imprisoned teacher must be freed; Political prisoner must be freed; Worker, teacher, student, unity, unity; Enough oppression, our table is empty; We are all together; Inflation, grief, answer Rouhani,” the Iranian opposition (NCRI) reported on Wednesday.

The NCRI’s President Maryam Rajavi saluted the noble retirees in Tehran, Mashhad and other cities across the country, as well as the poor and hardworking farmers in Isfahan who oppose the regime’s discrimination and oppression. She said the clerical regime is trying in vain to stop these protests by mobilization of suppressive forces and imposing restrictions and arresting protesters.

Mrs. Rajavi called on the public, especially women and youth, to support the protesters and said the protests, demonstrations, and uprising of various strata of Iranian society and the resistance units will continue until the final victory.

The protests by retirees as well as demonstration and protests by farmers, students, truckers, teachers and other strata of the society are part of the Nationwide Strike and Protests that have swept the country since December 2017. These protests indicate the Iranian people’s desire and resolve to bring democratic change in Iran. According to the Iranian Opposition (NCRI), the protests will not stop here and Iran will see more protests and isolation in 2019.

The workers of Iran’s National Steel Industrial Group (INSIG) in Ahvaz have been on strike for over a month protesting against unpaid wages and poor working conditions. […]

The U.S. Department of Justice  announced on Monday that two agents of Iranian regime’s Intelligence Ministry, identified as Ahmadreza Mohammadi Doostdar and Majid Ghorbani, were […]