No Impunity For Mullahs’ Criminal Regime

In the summer of 1988, the Iranian regime quietly prepared the ground for an appalling crime against humanity that was the worst crime committed against political prisoners since World War II. In the hustle and bustle of ending the bloody 8-year-war with Iraq, desperate to find a way to save a face, Khomeini engineered the execution of political prisoners in Iran. It would have worked as the best diversion had it not been for the Mojahedin (People’s Mojahedin Organization of Iran-PMOI/MEK). The same organization Khomeini rightfully feared the most. He once said in the early years of his rule that the enemy is not the US, it is right here under our nose in Tehran. His audience knew full well who Khomeini was referring to.

A month later, an audio tape was leaked out by Ayatollah Hossein-Ali Montazeri’s son in August 2016. Montazeri, the handpicked successor of Khomeini, was sacked for his public objections to mass executions in 1988. He spent the rest of his life under house arrest and died in 2009.

In the tape, Montazeri is purportedly heard telling a meeting of the “Death Commission” in 1988 that they are responsible for the crime against humanity.

He said: “The greatest crime committed during the reign of the Islamic Republic, for which history will condemn us, has been committed by you. Your names will in the future be etched in the annals of history as criminals.”

In another part of the tape, Montazeri says that exterminating MEK members had become an obsession of Ahmad Khomeini’s long before the 1988 massacre. Montazeri in his tap quotes Ahmad as saying “All of them must be killed even a distant sympathizer who just reads their paper.” Considering Ahmad’s position as Khomeini’s right had man wiping out MEK members had been a strategic plan for the regime.

A four-member committee – famous among prisoners as Death Commission – consisted of the most ruthless killers in the regime tasked to carry out the executions. Some of them are still around and hold high offices including Pour-Mohammadi, Justice Minister in Hassan Rouhani’s first cabinet and now an advisor to regime’s head of judiciary. 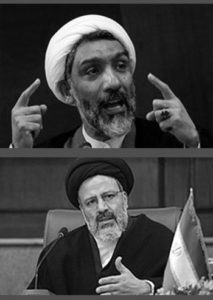 Pour-Mohammadi has since admitted his role in the “Death Commission” and boasted that he was proud to “carry out God’s will and that he has not lost sleep over what he did.”

Ebrahim Raisi was a low-level cleric at the time was another known member of the commission. In return for his services, Raisi rose in the rank and files of the regime’s hierarchy. He is a close confidant of the Supreme Leader Ali Khamenei.

Currently, Raisi is the custodian of Astan Quds Razavi, the wealthiest charity foundation in charge of Iran’s holiest shrine in Mashhad, northeastern Iran, with close ties to Khamenei’s powerhouse. He ran for presidential office last year and lost to Rouhani.

Alireza Avaie Succeeded Pour-Mohammadi. He was appointed Justice Minister in Hassan Rouhai’s second cabinet. Avaie is as guilty as his predecessor.

Avaie’s personal record in participating in human rights violations goes a long way back when he was partner in crime with the likes of Raisi. He was also a member of Death Commission in southwestern Iran.

The Iranian regime’s cruelty goes far beyond the victims and it hits immediate family members and even distant relatives.

Iranian regime for years tried unsuccessfully to put a lid on its heinous crime. Families of the victims are still in dark as to what really happen to their children on that fateful summer. Some are searching for signs of their loved ones and often traveled in far corners of the country hopping for a single clue. 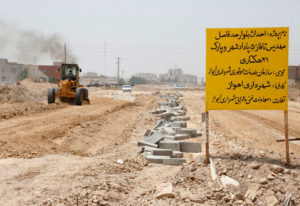 Getting rid of any evidence that might implicate the perpetrators of the crime has been a strict policy of the regime. The bodies of the executed prisoners were not allowed to be buried in public cemeteries. They were buried in mass graves usually far from the cities hoping that the families would not find them. Razing the unmarked mass graves, according to Amnesty International, is tantamount to psychological torture of the families of the victims. One can image a mother, wife or sister that gotten use to weekly visits of an unmarked grave site which she is not even sure that it is his son, husband or brother and one day finds out a highway soon will be built on top of it. In the case of grave site in Ahvaz that is what happened.

On September 26, 2017, the UN Special Rapporteur on the situation of human rights in Iran, late Asma Jahangir, refers to the widespread executions inside Iran’s prisons in 1988, reminding, “The family of those who were executed have the right to know and be informed on what happened in 1988”.

In the meantime, Ms. Jahangir urged the regime “to establish an independent truth finding committee to investigate the 1988 massacre of prisoners who were doing their terms behind bars.”

Seeking justice for political prisoners executed in 1988 was galvanized by recent protests in Iran. Since December 2017, as the protests and uprising continue in cities across the country, curious students at the colleges across Iran have used every opportunity to challenge regime’s officials over the sticky issues. The 1988 massacre in Iran deserves an independent international investigation. It has been kept in the dark for too long.

Next: The Facts About 1988 Massacre of Political Prisoners in Iran