Iranians from across the world gathered in front of the United Nations headquarters in New York For the second consecutive day on September 26, 2018, to protest against the presence of Hassan Rouhani, the Iranian regime’s president, and to echo the demands of thousands of protesters in Iran who are calling for regime change in their country. Yesterday, the protesters gathered for a similar protest despite unfavorable weather conditions while Rouhani spoke at the 73rd UN General Assembly summit.

Yesterday’s demonstration also featured speeches by politicians, religious leaders, members of the National Council of Iran (NCRI) and representatives of the Syrian opposition.

“I have come here to protest against the presence of Rouhani at the United Nations,” said one protester, who had traveled from California to New York. “Rouhani does not represent the Iranian people. He is not the president of Iranian people.” 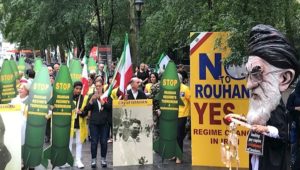 The protesters used different ways to put on display the crimes and illegal activities of the Iranian regime, of which there’s a long list. Most concerning in the agenda of Rouhani, who has been received as a state leader at the UN and is being framed as a “moderate” figure by many western politicians, is the worrying spike of executions during his presidency.

According to figures published by the Iranian opposition and confirmed by many international human rights organizations, more than 3,500 people have been executed during six years of Rouhani’s presidency.

Most recently the Iranian regime executed three Kurdish political prisoners despite international calls for halting the sentences. Human rights organizations such as Amnesty International had pointed out that the sentences were handed out based on forced confessions, extracted under torture. The executions triggered a widespread wave of strikes in Iran’s Kurdish cities. 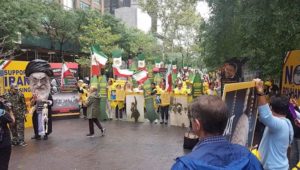 “I’m here to be the voice of the people of Iran, who are being tortured and executed by the Iranian regime on a daily basis,” said one of the protesters. “Our people are suffering from severe poverty. They’re selling their body organs just to make ends meet. No state should enter trade deals with this regime.”

Deteriorating economic conditions triggered nationwide protests in Iran in December, but the demonstrations quickly turned into anti-government uprisings that demanded the ouster of the mullahs from Iran. The Iranian regime has tried to lay the blame on foreign countries, but protesters in Iran have made it clear in their slogans that government corruption and expenditure on meddling in neighboring countries are the main cause of economic problems.

The demonstrators in New York hailed the Iranian resistance units, groups of MEK supporters in Iran who are helping spread and organize demonstrations across Iran despite the regime’s efforts to suppress protests. “From New York, we hail all resistance units in Iran,” the protesters chanted.