Khamenei focused his remarks on the youths, describing them as “deviated” and “a problem for the society” and said: “The true problem is that the country’s youth believe there are no solutions.” 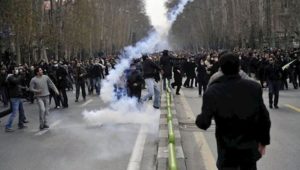 The truth, however, is that the Iranian people’s ongoing protests have proven that the ruling mullahs literally hate Iran’s youths. They are rebellious in nature and are in pursuit of liberating their country from the mullahs’ dictatorship.

The regime has focused a demonizing campaign against the Iranian opposition People’s Mojahedin Organization of Iran (PMOI/MEK) under the leadership of Massoud Rajavi and the NCRI President Maryam Rajavi. Despite these efforts, the country’s youth have come to know this Resistance due to their presence in Iran’s social fabric and a movement seeking justice for over 30,000 political prisoners massacred in the summer of 1988 by the mullahs’ regime.

As a result, the youths and indeed the entire Iranian nation are aiming to bring an end to this corrupt regime by rising up against continuing arrests, torture and executions and the daily plundering by the mullahs corrupt officials seen across the country.

These youths are now gaining strength under the PMOI/MEK organized “Resistance Units” framework, and that is the truth Khamenei has been forced to acknowledge. The youths are continuing to play a defining role in the uprising against the mullahs’ dictatorship, raising anger among the mullahs’ regime to a significant level.

In his speech, Khamenei intended to claim his regime remains in power and has not been overthrown. Similar to Adolf Hitler, Khamenei has made the mistake of believing his regime enjoys popular support.

Khamenei went as far as claiming Iran’s youth are the “driving force” of his regime. However, he failed to mention the fact that all major decisions in this regime are in the hands of those who are the youth’s main enemies, and the enemies of all Iranians. Of course, Khamenei failed to mention the fact that in the past four decades his regime has executed tens of thousands of youths.

Khamenei, however, did say he is facing a major dilemma of defections among his regime’s supporters. This is an unprecedented acknowledgment of his regime’s days facing numbered days. He also repeated Khomeini’s remarks of saying the regime’s enemy is not the U.S., but the PMOI/MEK that are active inside Iran. He said dissidents are active and even present among us.

Khamenei also didn’t cloak the fact that his regime’s survival faces “a treacherous road” full of “obstacles, and is in need of a major “intellectual and practical overhaul.” However, senior regime officials are all “tired, out of steam and lacking any spirit,” he added.

“We have economic problems. We have an economy relying on oil, which itself is a major problem. We also lack a culture of cutting back on consumption,” Khamenei said.

He could not be clearer in acknowledging the fact that his regime has suffered defeats in the face of crippling sanctions scheduled for early November. All the while, he threatened to impose further crackdown against the Iranian people.

Khamenei discussed the people’s poverty and poor living conditions but failed to mention his own assets, and those of senior Iranian regime officials, reaching hundreds of millions, and even dozens of billions of dollars.

“Our dissidents are using the media to influence public opinion. The media is an important tool and if the enemy gets a hold of it, it is a dangerous tool,” he emphasized. However, he didn’t mention the fact that his regime has thousands of state-controlled media outlets in the face of just a few belonging to the opposition. 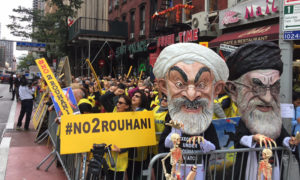 This indicates how even a low number of media outlets have been able to neutralize the regime’s media machine, and now becoming not only the voice of the Iranian people but encouraging the world to stand alongside the Iranian people and their organized resistance.

This is the status quo of a struggle between the Iranian people against the ruling mullahs. A canvas indicating a lack of legitimacy for the mullahs’ regime in the face of a resistance movement that has been able to establish strong links with the people inside Iran through “networks of social media and other outlets.”

It was crystal clear for Khamenei from the very beginning that his regime has no cure for their crises, leaving him no choice but to order “fire at will” to his forces in the Revolutionary Guards and Basij.

As a result, the final confrontation between the Iranian people and their Resistance Units on one side against the mullahs’ dictatorship on the other is imminent.

EP Vice-president Telicka: #EU Must Not Be Silent About Behavior of Iranian Authorities Against Protesters

NCRI – English translation of text of a press release by Czech MEP Pavel Telicka, Vice-president of the European Parliament and member of the EP […]