Workers of Ahwaz National Steel Industrial Group continued their 23rd consecutive day of Strike and 31st day of protest rally on Monday December 10, while wearing white shirts (gowns) as a symbol of readiness to die for their rights. 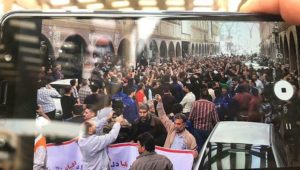 The workers workers vowed to continue their second month of protests while chanting slogans against the governor calling him inept, incompetent and careless.

In a meeting held in the Javad Al-Aemeh Mosque in Padadahshar, where a member of the regime’s parliament from Ahvaz while a group of the regime agents affiliated to the Revolutionary Guards (IRGC) were present claiming to address the water and sewage problems, a group of Ahvaz steel workers who were present protested and showed their anger towards the regime officials who were deceitfully trying to deviate the workers attention from the real problems caused by the regime-backed mafia bandits.

One of the furious workers of the Steel Industrial Group shouted over the member of parliament, saying “why don’t you name the mafia? Give us a name, name them, our life is blown away and we are devastated.”

U.S. Sanctions May Work On Iran Regime But Ultimate Solution Is Recognizing Iranian Resistance  On November 2, two days before the re-imposition of “the toughest […]