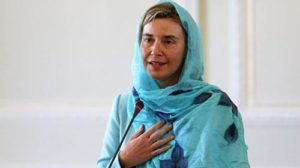 Al Arabia, Dec. 30, 2019 – This week, some of Iran’s Persian-language newspapers carried headlines boasting about European countries defending Iran and robustly aligning with Tehran.
European officials have even warned the US, President-elect Donald Trump, and the Republicans, that EU will not welcome or tolerate tearing up the nuclear deal or re-imposing international pressure on Iran. Iranian officials had made similar statements as well.
EU’s warnings highlight the notion that it does not desire to endanger its improving ties with Tehran. The EU desires to preserve its economic interests with Iran and the US simultaneously.
Despite the EU and Iran’s warnings, which are aimed at changing US political calculations toward Iran through political posturing, Washington needs to strongly pursue its own objectives and well-informed long-term orientated policies toward Iran. Then, the EU will find no option than to follow the US footsteps because of the high stakes involved.
What are the other reasons behind the notion that the EU is protecting the Islamic Republic? What are the EU’s objectives? And what are the geopolitical, strategic, and humanitarian repercussions of the EU’s appeasement policy towards Iran?

The most prominent reason behind the EU’s positions and appeasement policies toward Iran involve preserving its economic interests and increasing trade with Iran.
The EU is dependent on Russia in the energy sector. Iran’s energy sector has seduced European countries. Iran possesses the world’s second and fourth largest gas and oil reserves, respectively. European leaders are planning to decrease Russia’s political leverage over the EU by investing and upgrading Iran’s gas sector.
But what the EU does not recognize is that, in the long term, by strengthening the Islamic Republic’s establishment through trade, the EU is actually bolstering the Iran-Russia axis in the Middle East and beyond, tipping the balance of power against the EU.
Beside energy imports, the EU is benefiting from exports to Tehran as well as taking advantage of accessing Iranian markets, which is the largest untapped market in the world. Iran also has the 17th largest population in the world, the 2nd largest population in the Middle East after Egypt; the second largest economy in the Middle East and North Africa; and enjoys a highly young and westernized population which prefers Western products.
However, unfortunately, the major beneficiaries of EU trade with Iran are not the ordinary Iranian people. Major industries in Iran such as the oil or gas sectors are not privatized but owned by the government. The EU’s major purchases from Iran are done on the state level. Moreover, even those large Iranian companies that might seem private, are owned indirectly by the IRGC or the Supreme Leader.
The key beneficiaries are the Office of the Supreme Leader, Ayatollah Ali Khamenei and Iran’s Revolutionary Guard Corps (IRGC) which have significant control over Iran’s political and economic systems.
As a result, we can make the logical conclusion that a large amount of these additional trade and revenues are channeled to be used to strengthen Iran’s military complex and the hold on power by Khamenei and his Shiite cleric system. Iran is also desperate for these dollars to continue expanding its influence in the region, to support Bashar al-Assad, Shia militias, and shift the regional balance of power in its favor.

While trade is a critical factor for the EU, geopolitical and strategic factors come next. The EU has not had an articulated agenda addressing the nearly six-year war in Syria, or conflicts in other parts of the region. The EU’s policy, similar to that of Obama’s administration, is mainly anchored in the “wait and see” rather than a “proactive” foreign policy.
When a country or political entity does not have a clear policy, it generally tends to take the backseat and quietly allow another country, or entity, which does have a powerful, clear, and articulate strategy, to lead. Iran has a very clear, consistent and articulate policy towards Syria, that of preserving the power of Assad and the Alawite-dominated state.
Furthermore, since ISIS has become the EU’s number one threat, causing the Syrian war to become secondary, the EU is relying more and more on Iran to take the lead. This is due to the notion that Tehran has boasted about, and has successfully sold the idea, that Tehran is the only country that has put forces on the ground in Syria or Iraq to fight ISIS.
Finally, and unfortunately, the EU’s decision to view Iran solely from the prism of economic interests and its primary goal of pursuing its trade interests, inflicts harm on ordinary Iranian people and millions of Syrians who suffer from Iran’s military expansion and human rights abuses. The US and regional powers have the power to alter EU’s calculations.