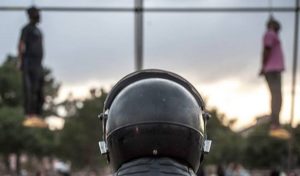 Iran Human Rights (AUG 1 2017): Since the end of the Muslim holy month of Ramadan, there has been a surge of executions in Iran. According to Iran Human Rights reports, there were 100 executions carried out in various Iranian prisons in the month of July – only eight of these executions were announced by Iranian official sources, including the Judiciary and the state-run media. 61 of the 100 executions were for drug related charges, 34 for murder charges, two for armed robbery, two for rape and one for unknown charges.

The execution of prisoners with drug charges continues in Iran while the Iranian Parliament has approved a general plan to amend the law for combating drugs. The Parliament is scheduled to vote on the bill again following a two-week holiday. In the event of the final approval of the plan, the death sentences for many prisoners will be commuted to a prison sentence.

Iran Human Rights calls for a halt to all executions in Iran and calls on authorities to remove the death penalty from Iran’s laws.

“Had the Iranian authorities waited for the bill to pass, then the death sentences for many of those executed for drug offences would have been commuted to prison terms,” says Mahmood Amiry-Moghaddam, the spokesperson for Iran Human Rights. “It is incomprehensible why the Iranian authorities, who have admitted that the death penalty doesn’t reduce drug crimes, can’t stop drug-related executions for just a few months.”

Many of the prisoners in Iran with drug related charges are executed, but in the event the proposed bill is passed by the Parliament, all death sentences for drug charges will be commuted to a prison sentence. It does not make sense why Iran’s judicial authorities refuse to stop executions for a few months even when Iranian authorities have stated several times on record that executions are not a deterrant against drug crimes, says Mahmood Amiry-Moghaddam, the spokesperson of Iran Human Rights.