Canada’s former Prime Minister Stephen Harper has been criticized for speaking at the “Free Iran” rally near Paris on June 30. Harper thanked the tens of thousands of participants of the event for their “long battle for a free and democratic Iran,” but didn’t endorse any political party. 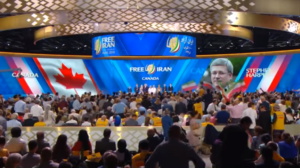 The European Parliament passed a declaration in 2010 calling on the United States to remove the PMOI from the American list. The resolution became official when high majority of the 736-seat chamber signed the resolution, making it official. It also called on Iraq to cease its blockade of Camp Ashraf, a settlement of more than 3,000 Iranian dissidents near the border between the two countries.

Regarding the Iranian Opposition’s Grand Gathering in Paris, Struan Stevenson, who represented Scotland in the European Parliament for 15 years and is now coordinator of the “Campaign for Iran Change” said: “The nationwide protests (currently underway) covered 142 cities and all 31 Iranian provinces. The 80 million Iranian citizens, over half of whom are under 30, have made it clear that they are fed up with fundamentalist rule. They are fed up with living in poverty as the venally corrupt mullahs siphon off the country’s wealth to fill their pockets and to finance conflict and terror throughout the Middle East.”

After the event, it was learned that a terror plot blueprinted by Tehran involving the arrest of an Iranian diplomat and five other individuals in Belgium, Germany and France to bomb the hall near the Charles De Gaulle airport where the rally was held had been intercepted. The diplomat of the Iranian embassy in Vienna was arrested in Germany over the terror plot that was discovered and foiled by Belgian authorities. Three other suspects were arrested in France and Germany. A PMOI official said the individual arrested in Germany had been the station chief of Iran’s ministry of intelligence and security (MOIS) in Vienna since 2014. Less than two weeks later, the U.S. State Department held a briefing specifically saying the Iranian regime is using its embassies “as cover to plot terrorist attacks.”

Tens of thousands of members of the Iranian diaspora and their supporters from across the world came to the event to hear the speech by the National Council of Resistance of Iran (NCRI’s) President-elect Maryam Rajavi and dozens of other prominent personalities who participated at the event. An umbrella bloc of opposition groups in exile, the NCRI seeks an end to the clerical rule in Iran. Mrs. Rajavi wants to restore peace, freedom, democracy, and human rights, as well as to stop torture and death penalty, and end regime’s foreign meddling. Her 10-point plan calls for a new constitution based on gender equality, separation of religion and state, individual freedom, freedom of assembly and parties, and a non-nuclear Iran.

Iran Uprising – No. 24 On the fifth day of the nationwide uprising against the mullahs’ regime, people took to the streets en mass in […]

Ramadan of Revolt in Iran, a Month of Uprisings for Freedom and Justice

Ramadan of Revolt Against The Mullahs’ Religious Tyranny In Iran, a Month of Uprising for Freedom and Justice Maryam Rajavi’s Remarks at Iftar Gathering On […]