On June 30, 2018, tens of thousands gathered at “Free Iran 2018 – The Alternative” convention in Paris with the presence of prominent figures from five continents to support the struggle of Iranian people and Resistance and express solidarity with the uprising of Iranian people.

In her speech at the gathering, Mrs. Maryam Rajavi, President-elect of Iranian Resistance, addressed the plight of the Iranian people and offered guidance for the international community: “I have come here to declare what you want: The overthrow of this regime is inevitable. Victory is certain and Iran will be free,” she told the tens of thousands of attendees, who cheered in response.

Mrs. Rajavi noted that, “Since the January uprising in Iran, the signs of change in Iran and the regime’s overthrow have appeared. The prospects for the victory of Iran’s democratic revolution, devoid of the mullahs and the Shah are looming. Through their uprisings and by relying on resistance units, the Iranian people have the leverage they need to topple this regime.”

She outlined 5 reasons pointing to looming downfall of the religious dictators in Iran:

1- “First, owing to the presence of the Resistance movement, the so-called solution within the religious fascism has become null and void.

2- “The second sign that the phase of the regime’s overthrow has arrived is that for the past six months the Iranian people have waged an uprising and a protest movement despite maximum suppression, despite the so-called suicides by the detainees (as the regime deceitfully claims) in the mullahs’ prisons and despite daily arrests and executions designed to intimidate the public.”

3- “The third sign of the inevitable overthrow of the ruling religious fascism is that social tensions and economic crises, especially high prices, unemployment, poverty, and inequality have reached an irreversible point.”

4- “The fourth sign of the phase of the regime’s overthrow is that internationally, the mullahs have lost the most important backer of the policy of appeasement, namely the United States. The international shield safeguarding the regime has fallen by the way side.”

5- “The fifth and most important signal of the phase of the mullahs’ overthrow is that the very development which the mullahs feared the most has happened: the linkage between the fury of the deprived and oppressed people and the organized Resistance movement.”

“We call for the establishment of a society based on freedom, democracy, and equality, which has clear demarcations with despotism and dependence as well as gender, ethnic and class discrimination” Mrs. Rajavi said, adding, “We have defended and will defend gender equality, the right to freely choose one’s attire, separation of religion and state, autonomy of nationalities, equal political and social rights for all citizens of Iran, abolition of the death penalty, freedom of expression, parties, the media, assembly, unions, associations and syndicates.” 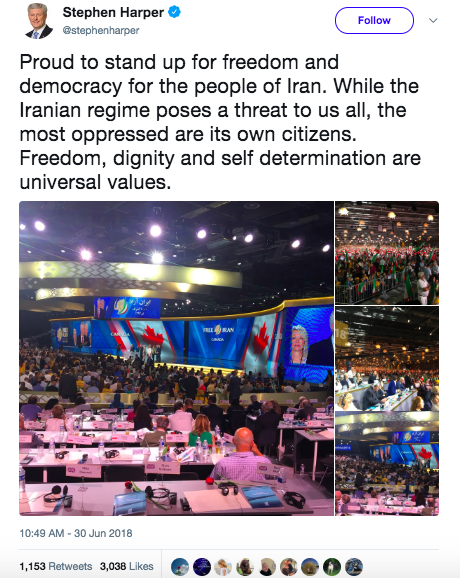 “Proud to stand up for freedom and democracy for the people of Iran. While the Iranian regime poses a threat to us all, the most oppressed are its own citizens. Freedom, dignity and self determination are universal values,” Tweeted Former Canadian Prime Minister, Stephen Harper, who attended and offered a speech at the gathering .

Iranian regime’s fear of this huge gathering and the growing prospect of democratic regime change in Iran became immediately evident when on July 2, 2018, European authorities announced that a diplomat attached to Iranian embassy in Austria and at least 2 Iranian terrorists living in Europe were arrested and charged for plotting to bomb the “Free Iran 2018 – The Alternative” rally. 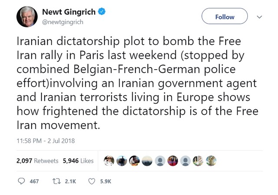 U.S. Secretary of State Michael Pompeo and Former New York Mayor Rudi Giuliani were among many officials and prominent personalities who condemned the clerical regime for plotting to kill thousands of innocent civilians and American citizens and using its embassies for terror plots.

Bill Richardson, the former New Mexico governor and DNC Chairman, also spoke at the gathering and outlined why Maryam Rajavi and the Iranian Resistance movement represent a viable alternative to Iran’s religious dictatorship:

Iran’s Revealing Remarks About the PMOI/MEK and Grand Gathering in Paris By: Jubin Katiraie While the Iranian society is deeply troubled by the country’s economic […]