On the second day of uprising in Isfahan, Youth confronted the regime’s suppressive forces and set tires on fire to neutralize the tear-gas effects. In the past few days, wave of protests and strike erupted once again in many cities across Iran including Isfahan, Karaj, Mashhad, Shiraz, Tabriz and Tehran where many people were arrested. 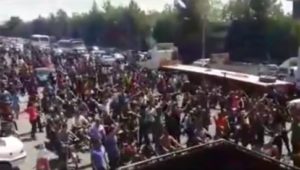 In Isfahan, people rallied to protest against the regime’s corruption and the declining economic situation for the second consecutive day on Wednesday. In addition, beginning on Tuesday, July 31, truck drivers and owners as well as large group of people and youth in the city of Isfahan have been staging a protest against spiraling high prices, repeated power outages and inhuman policies of the clerical regime in the city’s Amirkabir (now called new Shapour) industrial district. They subsequently marched toward the city’s main streets.

The National Council of Resistance of Iran (NCRI) in a Statement described the youth’s confronting the repressive forces in Isfahan as “Herald of Freedom” in Iran. Maryam Rajavi, President-elect of the NCRI, hailed the brave people of Isfahan and their courageous uprising against the mullahs tyranny and called the public, especially the youths, to support the uprising in Isfahan, Karaj and Shiraz.

The following is the NCRI statement:

Maryam Rajavi: Confrontation of the youth with the repressive forces, heralds the freedom of the country from the clutches of the mullahs

People in the New Shapour district of Isfahan continued the uprising against the clerical regime for the second day in a row with the chants of Shame on you Khamenei, leave the country alone; death to the dictator; do not be afraid, we are all together; our enemy is here, they falsely say it is America.

Various streets, including Amir Kabir, Moshir ul-Dowleh, Danesh, and Hezardastan crossings, were the scene of the youth of Isfahan confronting repressive agents. From various corners of New Shapour district, fire and heavy smoke pop up and the streets are full of rock and brick.

Mrs. Maryam Rajavi, President-elect of the Iranian Resistance, hailed the brave people of Isfahan and their courageous uprising against the tyranny of the mullahs, and said: “The brave and proud youths who are struggling with the tear gas and brutality of oppressive forces in New Shapour, are the messengers of the freedom of the homeland from the clutches of a brutal regime that has occupied Iran in the name of religion”. She called the public, especially the youths, to support the uprisers in Isfahan, Karaj and Shiraz.

Secretariat of the National Council of Resistance of Iran
August 1, 2018