On the 30th anniversary of the 1988 Massacre of 30,000 political prisoners in Iran, this horrific crime against humanity remains unpunished. What is known about the 1988 Massacre has been extracted and pieced together from limited number of reports by survivors and families of the victims who were called to collect bodies of their loved ones, as well as from scattered acknowledgments made by the regime’s officials. We invite you to read NCRI Women’s Committee full report in this regard. 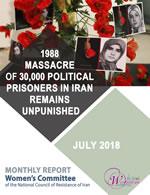 A Report on violation of human rights of #Iran protesters – #IranProtests

By IranHRM Introduction Thousands of Iranians angry over rising food prices, government institutions’ scam and inflation protested in the country’s second-largest city and other areas […]