At a press conference on Wednesday August 8, 2018, prominent Belgian and European lawyers announced new points on the Iranian regime’s foiled terror plot in Europe, including info on dignitaries from EU and the Middle East who have asked to enter the case as private plaintiffs.

On June 30, 2018, a terror plot blueprinted by Tehran to bomb the “Free Iran 2018” gathering in Villepinte near Paris was discovered and foiled by Belgian authorities that included the arrest of an Iranian diplomat and five other individuals in Belgium, Germany and France including a Belgian-Iranian couple that were in possession of 500 grams of TAPT – an explosive favored by terrorists – and a detonator. The couple were heading towards the gathering hall in Paris to implement their terrorist attack.

In the conference brief, William Bourdon, renowned French lawyer, referred to the case and confirmed that Assadollah Assadi, a Vienna-based Iranian diplomat, was arrested in Germany for his role in the terror plot. 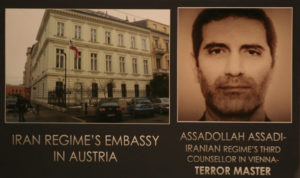 According to reliable information, Assadollah Assadi, an MOIS agent and a consular at the Iranian regime’s embassy in Vienna, who was arrested by German authorities the following day based on a European arrest warrant, provided the couple with the explosives and detonator and ordered them to carry out the terrorist attack.

The “Free Iran” gathering is an annual event in which tens of thousands of Iranians from around the world go to listen to dozens of politicians, officials, human rights activists, members of parliament, and other prominent personalities. It is in support of the NCRI and People’s Mojahedin Organization of Iran (PMOI/MEK), and the arrested couple were pretending to be supporters.

The National Council of Resistance of Iran (NCRI), spoke at the press conference providing more details about the regime’s terrorist plot foiled by authorities in Europe. Previously, the NCRI revealed that the terror attack on Free Iran 2018 Gathering was ordered by Iranian regime’s top officials (the Supreme Leader Ali Khamenei and President Hassan Rouhani).

“The Iranian Resistance has discovered that Assadi was the MOIS’ most important agent in Europe and is very experienced with explosions, demolitions, reconnaissance and intelligence gathering,” Mr. Mohaddessin explained.

The Iranian Resistance discovered that Assadi was trained in explosives during the Iran-Iraq war and then joined the MOIS. He was in charge of arresting and suppressing the political opposition and after rising through the ranks he became involved with terrorist plots.

The MEK released a statement in 2008 saying that Assadi is a MOIS agent at the embassy. In Vienna, Assadi was the third consular at the regime’s embassy and was head of the regime’s intelligence in Austria. He worked closely with other MOIS agents in Germany and France.

He was third secretary of the Iranian regime’s embassy in Baghdad in 2004 where he collected intelligence and worked against the PMOI whose members were in Camp Ashraf. He was involved in bombings, kidnapping and terrorist plots during his time in Iraq.

“Assadi is under the command of Amiri Moghdam – a previous member of the IRGC and now one of the most senior members of the MOIS. Moghadam was directly responsible for the operation and he passed the order to Assadi,” Mohaddessin explained.

The Resistance was able to find out that the Supreme National Security Council made the decision to carry out the attack on the Free Iran gathering in January this year. The decision was approved by Supreme Leader Ali Khamenei.

“The Iranian regime is planning to prevent German authorities from handing Assadi over to Belgium. Rather, they are planning to get him back to Austria where he can then be sent back to Iran,” Mohaddessin concluded. ⚡️

Iran: Tabriz on Strike, Protests in Other Cities

According to reports, Bazaar store-owners in the city of Tabriz, northwest Iran, went on strike on Wednesday, November 14, protesting skyrocketing prices, lack of goods […]

As the truck drivers marked the 3rd day of their new round of nationwide strikes on Friday, Iran have been the scene of numerous protests and […]