International Solidarity With the Iranian Resistance at the NCRI Headquarters By Renowned Global Dignitaries Following Grand Gathering of Free Iran on June 30, 2018 in Paris. 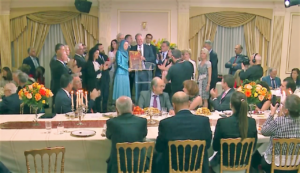 A declaration signed by over 2,500 European parliamentarians in support of the Iranian people’s nationwide uprising and Mrs. Rajavi’s Ten-Point Plan for a free Iran based on democracy, fundamental freedom and equality, a declaration of support by members of the Parliamentary Assembly of the Council of Europe, and a declaration of support for the Iranian Resistance signed by the Rt. Rev. Rowan Williams, the Archbishop of Canterbury, and 75 other bishops from across the U.K. were presented to Maryam Rajavi.

In her brief remarks, Maryam Rajavi expressed gratitude to the dignitaries who participated in the Iranian Resistance’s grand gathering and said:

The event this year was held in a very different circumstance than last year. Iranian cities have been the scenes of major anti-regime protests. The social atmosphere is volatile and the Iranian people demand regime change.

To disappoint them, the mullahs tell the people of Iran that no one hears their voice. And to justify their appeasement of the mullahs, their proponents claim that there is no viable alternative to this regime. These efforts, however, are getting no-where.

The event this year was also different because the international situation has dramatically changed. It appears that the policy of appeasement has run its course because it became clear that no amount of economic and political concessions will bring any change to the behavior of the ruling theocracy.

Lending support to the Iranian people and Resistance for freedom is crucial to a successful firm policy on the religious dictatorship ruling Iran. Toppling the mullahs’ regime is vital to the restoration of the human rights of the Iranian people, and to bringing peace and tranquility to the Middle East. And I am confident that the Iranian people will succeed in bringing freedom to Iran.

Thank you and God bless you all.

U.S. Sanctions May Work On Iran Regime But Ultimate Solution Is Recognizing Iranian Resistance  On November 2, two days before the re-imposition of “the toughest […]