At a global conference of Iranian communities in more than 20 cities across Europe and North America commemorating the 30th anniversary of 1988 massacre of political prisoners in Iran, Maryam Rajavi, President-elect of the Iranian opposition, the National Council of Resistance of Iran (NCRI), told her audience that the international community’s silence on the 1988 Massacre (a crimes against humanity) has allowed the Iranian regime to continue with its human rights abuses and repression inside Iran and terrorism and warmongering abroad. 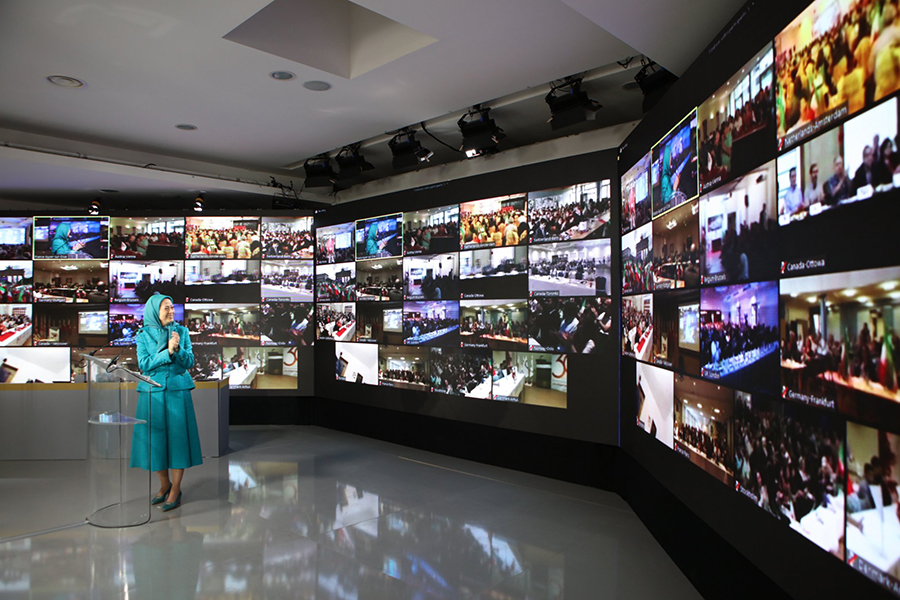 “The mullahs have continued with impunity to violate human rights in Iran, crack down on public protests, launch terrorist operations, and wage catastrophic wars in the Middle East and other countries. Now, the time has come to end this silence,” Mrs. Rajavi said.

After four decades of repression and human rights abuses in Iran, the clerical regime’s leaders must face justice, she said while urging the UN Security Council to prepare for the prosecution of those responsible for the 1988 massacre and in charge of four decades of crimes in Iran.

“The clerical regime’s reaction to dissent, even inside prisons under their own control, is mass execution,” she said adding, “Any legitimate protest or demonstration is repressed by detention and torture of participants.

“In the uprisings last December and January, what was the protesters’ demand and what did they do wrong to be tortured to death? The bodies of a number of them were handed over to their families, telling them that they had committed suicide while in detention.

“The Iranian regime officials commit the crimes and yet blame the victims of torture and massacre as culprits and criminals,” she added.

Noting the regime’s recent terror plot in Europe and the arrest of its spies in the U.S. as an example of the regime’s state-sponsor terrorist attempts, Mrs. Rajavi emphasized that the regime’s spies and diplomat-terrorists should be expelled from western countries, and their embassies closed.

According to Mrs. Rajavi, as the regime takes advantage of diplomatic resources to promote state-sponsored terrorism, all relations with the regime should be terminated.

While paying tribute to the 30,000 political prisoners massacred in 110 cities across the country, Maryam Rajavi pointed out the exceptional impact of the sacrifices made by those heroes, and the impact of their steadfastness and courage on the battle that is going on these days in cities across Iran. “The resistance units in Iran are following the footsteps of those men and women who were massacred in 1988 because they said no to the regime.” 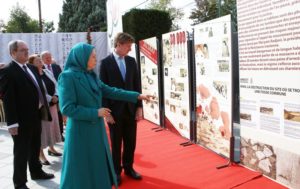 “The time has come for the world community to stand by the people of Iran in their uprising against the religious fascist regime ruling Iran and recognize their determination for regime change,” the NCRI’s President-elect asserted while discussing the important role of the PMOI/MEK and resistance units in organizing the protests and uprising.

“The clerical regime is beleaguered by the eight-month-long uprisings, by the growing role of the PMOI and resistance units in organizing and leading the revolts, and by the consequences of a plummeting and drowning economy,” she pointed out.

The political dignitaries, representatives of Iranian communities, and witnesses to the 1988 massacre who spoke to the global video conference urged the International Community to support the Iranian people’s uprising for regime change and freedom in Iran and adopt a decisive policy against the theocratic regime ruling Iran.

They also called for condemnation of the Iranian regime’s human rights abuses and terrorism, and prosecution of the masterminds and perpetrators of the 1988 massacre who are presently among the highest regime officials and are directly involved in the suppression of the ongoing anti-government protests in Iran.

After 30 years of silence, the International Community must now address the 1988 Massacre in Iran and bring the masterminds and perpetrators of this crime against humanity before international criminal courts to face justice.

Albania expelled two Iranian diplomats because of their “involvement in activities that harm the country’s security” and for “violating their diplomatic status,” Albanian authorities declared […]

The 1988 Massacre In Iran Thousands of Tormented Families Still Waiting for Justice  A Report by Amnesty International Between July and September 1988, thousands of […]