As the workers of Haft Tappeh Sugarcane continued their third week of strike and protest rally in the city of Shush on Monday, November 19, they  chanted anti-government slogans and demanded release of their co-workers.

The protesters marched toward the city proper and gathered in front of the mayor’s office demanding release of their colleagues and representatives who were arrested by the Iranian regime’s security forces following yesterday’s protest rally.  (Watch a Video of the Yesterday’s Protest Here). This is the 15th day of the strike and protests by the workers who have not received their salary for 4 months. 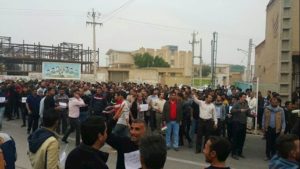 On Sunday, at the end of the day’s protests, the security forces of the Iranian regime arrested the representatives of the protesting workers along with a number of other workers and transferred them to the security police headquarters detention.

In an act of defiance to the regime’s attempt at intimidation and threats, the angry protesters chanted: “Neither threats nor prison no longer has any effect.” They also chanted: “Imprisoned workers must be freed!”

Mrs. Maryam Rajavi, President-elect of the Iranian opposition (the NCRI), saluted the striking workers and called on all youth, especially in Khuzestan, to support the workers of Haft Tappeh and Ahvaz Steel factories.

She urged all human rights lawyers and organizations to take immediate action to release the arrested people and condemn the repressive measures of the Iranian regime against the workers.

In the new round of their nationwide strike, Iran’s teachers began the second day of their sit-in protest in many cities across the country on […]