At least four six-year-old Baluchi girls died and 55 others suffered severe burns in a primary school fire in the city of Zahedan on Tuesday, December 18, due to negligence of the authorities.

Alireza Nakhaee, Director General of Education in Sistan and Baluchestan province (Southeast of Iran), acknowledged the “negligence of some colleagues,” regarding the school fire. 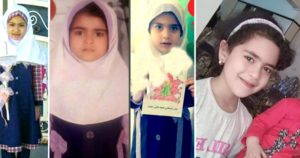 These terrible tragedies that occur every year as the cold season approaches, is due to the lack of a healthy heating system in schools where the number of innocent students in their classes is several times the school capacity. Severe burns of dozens of girl students in the Shinabad village of Piranshahr (Kurdistan province), the burning of elementary school students in Sarvestan in Fars Province, and in Dorudzan village of Marvdasht, and Almona village in Lorestan province and in a primary school in the Roudbast of Bobolsar are only a few examples of these incidents, whose news has been leaked to the press despite the efforts by the criminal officials of the Iranian regime to block the release of these news.

While the regime officials spend billions of dollars annually on terrorist operations and warmongering in the region and in other countries of the world, or spend a lot of money on expanding extremism and pour billions of dollars of plundered money into their bank accounts, speak shamelessly about the wear and tear of heating devices that are nothing but a kerosene heater. The innocent students of the country do not even have the share of the country’s huge revenues and capital equivalent to a proper heater.

The Iranian Resistance Education Committee Chairwoman expresses deep condolences on the horrible death of the schoolgirls and wished urgent healing for the wounded and patience for the families.

The NCRI Education Committee Chairwoman said the occurrence of these incidents that hurt the feelings of any listener is only one of the results of the rule of the super-corrupt and criminal regime of Velayat-e faqih. As long as this regime is in power, Iranian children have no other share of life but poverty, deprivations, suppression, and torture, and their share from school is being burned alive in the fire. The only way to cure all these tragedies is to unite and solidify all strata to overthrow the clerical rule and establish freedom and democracy in Iran.

NCRI-US: Washington, DC, 15 February 2018—In a press conference in its Washington, DC office, the National Council of Resistance of Iran revealed new details about […]