On the fifth day of the truckers nationwide strike that has spread to over 220 cities across Iran, 15 truck drivers were arrested on Thursday, according to Ismaeel Sadeghi Niaraki, the regime’s prosecutor in Qazvin Province (northwest Iran) who claimed these drivers “blocked roads with their trucks and disrupted commuting inroads inside the province.”

“Action has been taken against any individual who disrupts people’s lives and we will not allow people seeking their own interests to block roads and prevent general commuting, disrupting people’s lives,” the regime’s prosecutor said while threatening the truckers during an interview with the state-run Mehr news agency affiliated to the regime’s Ministry of Intelligence and Security (MOIS).

The hardworking truck drivers of Iran continued their strike for the fifth consecutive day. 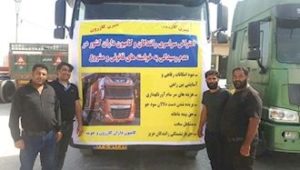 On Wednesday the truckers of Rafsanjan and Shahr-e Parandak (Markazi Province) also joined the massive strike spreading throughout the country. Reports indicate people from other walks of life are also joining this ever-growing protest movement.

On Thursday, bus drivers in Dezful, southwest Iran, declared their solidarity with the truck drivers and went on strike.

On Wednesday, vehicles transferring fruits from nearby towns to the city of Zahedan, the provincial capital of Sistan & Baluchistan Province in southeast Iran, emptied their loads in the city’s Sarallah Boulevard and joined this strike.

Bus passenger travelling companies such as Iran Peyma, Hamsafar, TBT and Royal Safar in Ahvaz, Abadan, Khorramshahr, Mahshahr, Izzeh and other cities of Khuzestan Province closed their ticket selling offices and branches in solidarity with the truck drivers’ protests.

A number of transportation companies have also closed down in solidarity with the truckers’ nationwide strike.

Truck drivers in the city of Sirjan blocked a road on drivers who loaded goods despite the strike spreading throughout the country. In Zahedan, fruit trucks emptied their loads in the city’s Sarallah Boulevard and joined this strike. They have also announced their support for the truck drivers.

In addition, a group of shop owners in Tehran’s bazaar issued a statement in support of the truck drivers’ strike.

Marking third consecutive day, truck drivers throughout Iran continued their new round of nationwide strikes on Friday, while reports indicate that people from all walks […]

Iran – Nov. 19, 2018: Workers of Haft Tappeh Sugarcane continued their demonstration at the factory today (November 19) and staged protest rally in the city […]