Despite windy ِweather and burning cold, freedom loving Iranians have gathered in Mel Lastman Square on Yonge Street in Toronto on Saturday, November 10, to show their Solidarity with Iran’s nationwide protests and strike and to support Iranian people in their legitimate call for democratic change in Iran. 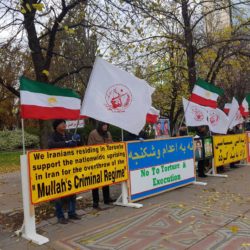 These demonstrators are demanding the Mullah’s regime to release political prisoners and all the brave protesters who have been arrested and put in prison following recent peaceful protests in Iran.

These demonstrations are held every week in Toronto, Ottawa and a number of other cities in Canada.

In Ottawa, Iranians gathered in front of Parliament Hill despite the windy weather and cold temperature Ottawa is famous for, to show their Solidarity with #IranProtests and support of #IranStrike. 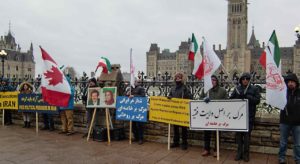 Watch Video of the Demonstration in Toronto Here

As the workers of Haft Tappeh Sugarcane continued their third week of strike and protest rally in the city of Shush on Monday, November 19, they  chanted […]

December 24, 2018 A Message to the Suffering Christians of Iran, Fellow Compatriots and Followers of Christ Around the World The year 2019 would be […]

Reliable reports indicate that some 2,000 farmers of Khorasgan District rallied toward the famous Khaju Bridge in the city of Isfahan on Wednesday, January 2, to […]