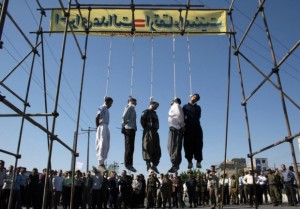 Iran is one of the leading executioners of juvenile offenders, despite its improved legal protections for children and a pledge more than two decades ago to end the death penalty for convicts younger than 18, Amnesty International said Monday.

In a new report, Amnesty International said that it had documented the execution of at least 73 juveniles in Iran from 2005 to 2015 and that 160 juvenile offenders are languishing on the country’s death row.

The report casts doubt on laws meant to improve children’s rights in Iran in the past few years, including new discretion by judges to impose alternative punishments on juveniles convicted of capital crimes. In reality, the report said, these changes are attempts by the authorities to “whitewash their continuing violations of children’s rights and deflect criticism of their appalling record as one of the world’s last executioners of juvenile offenders.”

Amnesty International, a leading global advocate for abolition of the death penalty, had also recorded the execution of juveniles in Pakistan, Saudi Arabia and Yemen, and there are juveniles on death row in the Maldives and Nigeria.

There is little doubt among rights groups that Iran has executed more people convicted of capital crimes committed as minors than any other country.

“Iran is almost certainly the world leader in executing juvenile offenders,” Michael G. Bochenek, senior counsel of the children’s rights division at Human Rights Watch, said in a post on its website in April.

Amnesty International has released its report as a United Nations committee is reviewing compliance with the Convention of the Rights of the Child. In 1994, Iran ratified that treaty, which prohibits capital punishment and life imprisonment without the possibility of release for offenses committed by people younger than 18.

“This report sheds light on Iran’s shameful disregard for the rights of children,” Said Boumedouha, deputy director of Amnesty International’s Middle East and North Africa Program, said in a statement released with the report. “Despite some juvenile justice reforms, Iran continues to lag behind the rest of the world, maintaining laws that permit girls as young as 9 and boys as young as 15 to be sentenced to death.”

There was no immediate comment from Iranian officials on the Amnesty International report. Requests for a response from Iran’s mission to the United Nations in New York were not returned. The Iranian judicial authorities have previously sought to impugn reporting by Amnesty International about Iran’s use of the death penalty as biased and lacking credibility.

Elise Auerbach, an Iran specialist in Amnesty International’s United States branch, said Iran had in the past sought to sidestep criticism of its juvenile death-penalty practices by saying that offenders were not executed until after they had reached adulthood.

Ms. Auerbach said the report, written by researchers at Amnesty International’s headquarters in London, was based on information received from death-penalty opponents and human rights defenders in Iran, as well as from lawyers and relatives of juveniles convicted of capital crimes in Iran.

Now that Iran is emerging from an era of international sanctions and is seeking broader acceptance, Ms. Auerbach said, rights groups are hoping that the Iranian authorities “realize they have to act in accordance with international human rights standards.”

For years, Iran has ranked among the world’s top executioners. In July, Amnesty International said the Iranian authorities were believed to have executed 694 people in the first seven months of 2015, the equivalent of more than three people a day.