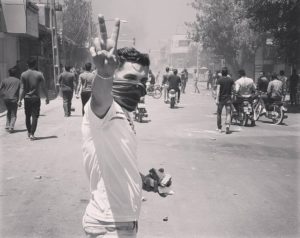 While the regime in Iran is facing a multitude of crises on the domestic and international front, the most prominent crisis is the ongoing protests that have been raging across the country since December 2017. The people of Iran, fed up from decades of repression, corruption, unemployment, inflation, and miseries, have taken to the streets despite the regime’s brutal crackdown and are confronting security forces to voice their demands for regime change and freedom.

The regime’s officials are worried that the protests are becoming increasingly organized and fast-paced. Abbas Abdi, a key figure in the Iranian regime’s so-called reformist camp admitted as much, saying, “In comparison to December, the protests have become better organized.”

Saeid Hajjarian, a theorist of the regime’s reformist camp compared the regime to “a person standing on a floating bridge, waiting for disaster to strike.” 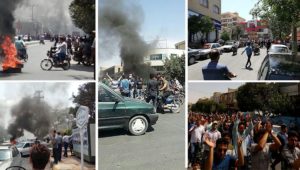 In the past week alone, protests erupted in several cities, in the bazaar, sports stadiums and other places. The week before was no different. And all protests are marked with slogans directed at the highest Iranian officials, including Ali Khamenei, the Iranian regime’s supreme leader. The Iranian regime has hiked its security measures, bringing police, special forces and plainclothes agents to control the situation and prevent protests from shaping. But the Iranian people are showing no fear and relent in taking to the streets and protesting against the regime.

What’s evident is that the regime fears its overthrow, a demand that is becoming an inseparable part of all protests, regardless of what triggers them. Several regime officials are warning against the population’s dissatisfaction with the regime and the danger of the Iran protests spinning out of the regime’s control.

Ali Khoram, a former diplomat from the faction of Hassan Rouhani, the incumbent president, urges the regime to initiate talks with world powers, warning that addressing the “rage of the people” should be the regime’s priority. “The entire regime is facing the dangers of the rage of the people, foreign invasion, and economic collapse,” Khoram says, according to the state-run Ruydad, adding, “We believe that to dampen the situation, we should engage in negotiations.”

Bahar, another state-run news website, writes, “We witness deep concerns and grievances in the society,” and concludes that “There’s no other solution but to engage in talks with Iran’s main counterpart.”

Interim Tehran Friday prayer leader Mohammad Emami-Kashani tried to downplay the protests while betraying his own fear of the situation. “Four people start a situation, and other people who have problems become deceived and get mixed with them. They take photos and distribute it. This is what the world is maneuvering on,” he said in last week’s Friday prayers.

Mohammad Ali Al-e Hashem, the Friday prayer leader in Tabriz, also expressed his fear of the “enemy,” an indirect reference to the PMOI/MEK, saying, “During the street protests, the enemy is taking advantage to further their own ends.”

The increasing protests are also sparking infighting among the regime’s officials, with some calling off others for having contributed to the country’s economic woes. Nouri Hamedani, one of the high-authority clerics of the regime warned, “The people will not tolerate that some steal the people’s wealth while others live without food” in comments that were published in Keyhan, the supreme leader’s mouthpiece.

Images of the regime officials luxury lives and their family members living abroad have been circulating in social media and have become the source of fury among ordinary Iranians, most of whom are living in substandard conditions and don’t earn enough to live a decent life.

Hamedani warned against “the enemy taking advantage” of the situation and asked the people “not to allow the enemy to take advantage.”

Mahmoud Ahmadinejad, the former president of the Iranian regime, admitted that the regime is facing a dead end. “The question is, who is responsible for this situation? I believe that all officials are responsible, all three powers. The left and right are the twin blades of the same scissors,” he said, referring to both rivaling factions in the regime.

In comments to the Etemad Online website, Saleh Nikbakht, a jurist with close ties with Rouhani’s faction, said, “It is evident that the people are expressing their grievances and dissatisfaction on the streets and in the social media. We must remedy the situation before the worst comes to pass.”

In many cities, Friday prayer leaders expressed their fear from the continued protests and uprising across Iran and the role of the PMOI/MEK, which they usually refer to as “the enemy.”

This clearly shows the regime’s fear of the protests and the “enemy” that is organizing them, which has disrupted the regime’s balance in its entirety.

Iran – Nov. 19, 2018: Workers of Haft Tappeh Sugarcane continued their demonstration at the factory today (November 19) and staged protest rally in the city […]

People of Iran Want Democratic Change  By Mohammad Sadat Khansari Companies and governments around the world are now banned from using U.S. dollars in their […]