Workers of the Haft Tappeh Sugarcane Company have been continuing their strike for 11 day now protesting mismanagement of the company and seeking answers to their demands including wage arrears and unpaid salaries and benefits for months.

The National Steel Group workers of Ahvaz have been protesting high cost of living and the several months of unpaid wages for several days. They have now joined with the Haft Tappeh Sugarcane workers taking their protests to a new level. (Watch Video of the Protest).

Iranian opposition leaders Maryam Rajavi voiced her support for the protesting workers and said that workers’ unity and perseverance against the mullahs’ oppressive rule herald a free, prosperous Iran devoid of all forms of repression, discrimination and injustice. “Poverty, inflation, unemployment and corruption were brought to our country by the religious fascism, and will continue as long as this medieval regime is in power,” she said. 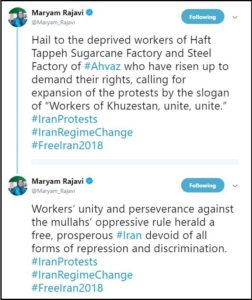 Despite windy ِweather and burning cold, freedom loving Iranians have gathered in Mel Lastman Square on Yonge Street in Toronto on Saturday, November 10, to show […]

Iran: Tabriz on Strike, Protests in Other Cities

According to reports, Bazaar store-owners in the city of Tabriz, northwest Iran, went on strike on Wednesday, November 14, protesting skyrocketing prices, lack of goods […]

Marking third consecutive day, truck drivers throughout Iran continued their new round of nationwide strikes on Friday, while reports indicate that people from all walks […]