The Iranian Regime’s Ministry of Intelligence and Security (MOIS) has spied on and violently suppressed the regime’s opponents both at home and abroad since it was formed in the 1980s.

The regime’s officials have conceded several times that if they fail to inflame conflicts outside Iran’s borders, they would have to fight for the regime’s survival within Iran’s borders. This is because they believe external conflicts would draw attention away from domestic issues and internal crises.

Iran’s new wave of terrorism reflects the regime’s inability to deal with the new wave of nationwide uprising that began in December 2017 and continued to date.

Following the uprising, Iran’s MOIS has set about a new phase of crackdown and terrorism after accusing the PMOI/MEK of organizing the strike and protests.

In the summer of 2018, two sleeper cells of the MOIS were arrested by law enforcement authorities in Europe and the United States. The first was an activated sleeper cell, arrested by Belgian police as they were traveling to Paris to detonate an explosive device at the Iranian opposition gathering in Paris on June 30. Iran’s MOIS had intended to cause a massive casualty since a large crowd was attending the gathering.

The second MOIS terror cell were arrested in the United States for conducting intelligence and reconnaissance operations on NCRI representatives.

A few days ago, a murder plot by a third MOIS cell was foiled in Denmark. 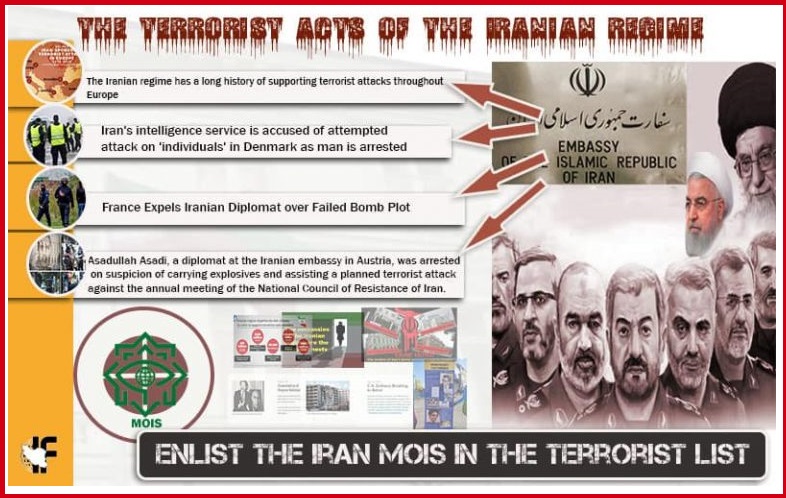 In a Conference titled “Iran’s New Wave of Terrorism – The EU and US Responses,” held on October 4, 2018, at the Residence Palace in Brussels, the Iranian resistance emphasized on the necessity and importance of the MOIS blacklisting by Europe and the Unites States.

In this regard, in a video message addressing the political dignitaries and the audience, Maryam Rajavi, the NCRI President-elect, stated: “By using terrorism, the regime wants to compel the world to silence and surrender. The best response to such a regime is firmness. This is a responsible policy for global peace and security. The mullahs are highly motivated for terrorism.”

“The decisions for terrorist operations are made at Iran’s National Supreme Security Council presided by Hassan Rouhani, and are subsequently approved by Khamenei,” she said.

“Silence vis-à-vis mullahs terrorism is the most harmful form of appeasement that costs not only security of Iranians but also security of Europe,” Mrs. Rajavi added.

Subsequently, appreciating the firm stance by the Danish government against terrorism, Mrs. Rajavi emphasized the necessity of enlisting the regime’s MOIS as a terrorist entity.

Oct 30, 2018
Lauding #Denmark for reacting decisively to terrorism by the Iranian regime which has already carried out hundreds of extra-territorial terrorist operations. Do not believe the fallacy of rogue groups. #dkpol

The people of #Iran rose up and cried out, “Hardliners, reformists, the game is over.” Now, the European Union must immediately place the mullahs’ Ministry of Intelligence and Security (MOIS) on its terror list. 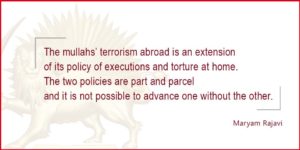 Oct 30, 2018
The mullahs’ terrorism abroad is an extension of its policy of executions and torture at home. The two policies are part and parcel and it is not possible to advance one without the other.#ExpelIranDiplomatTerrorists #Iran

Furthermore, in the Conference on “Iran’s new wave of Terrorism, the EU and US responses” Senator Torricelli said: “It is a pattern well recognized in history. For nine months, hundreds and then thousands of people in small towns and cities across Iran have been demanding to reclaim their future, to end the despotic regime and restore democracy in Iran.

The government of Iran is watching. Silence invites more attacks. But a policy of appeasement ensures more terrorism. Iran is not just being tested here. So is the European Union and NATO and the United States. This is a defining moment,” he added.

Considering these facts, Iran’s MOIS will conduct more terrorism if it is condoned. It is, therefore, necessary for Europe to adopt a firm stance.

As Mr. Vidal-Quadras, stated in the conference: “The High Representative Mrs. Federica Mogherini, must end her silence and condemn these terrorist actions by the Iranian regime and condemn them clearly and loudly.”

In a Statement on October 20, Ten MEPs called for tough measures against Iran regime’s terrorism. The statement calls on the European Union to blacklist the Iranian regime’s Ministry of Intelligence and Security (MOIS) for its undeniable role in Tehran’s terrorism in Europe and elsewhere.

According to a statement by EU issued back in April 1997, “Visas [should] not be granted to Iranians with intelligence and security functions” and “Iranian intelligence personnel should be expelled from European Union Member States,” the MEPs said.

In addition, in a joint Statement released on November 19, 150 Members of the European Parliament called on EU to expel Iran’s Intelligence Agents from its member countries.

The only way to confront Iran regime’s terrorism is to adopt a firm policy. All entities of the regime involved in planning, training, facilitating and funding terrorism must be sanctioned, and more importantly, the MOIS must be put on FTO list. A firm policy against mullahs terrorism should adopt the following actions:

*  Prosecute Iran’s MOIS agents in the US and Europe

A conference was held in Paris, District 1 City Hall, on August 3, 2018 to commemorate the memory of the victims of the 1988 massacre […]

After 30 Years of Silence, International Community Must Address 1988 Massacre of Political Prisoners in Iran

Roadmap to Regime Change in Iran

Opposition Leader – Roadmap to Regime Change in Iran During the past 14 years, the annual “Free Iran” gathering in Paris has been an event […]